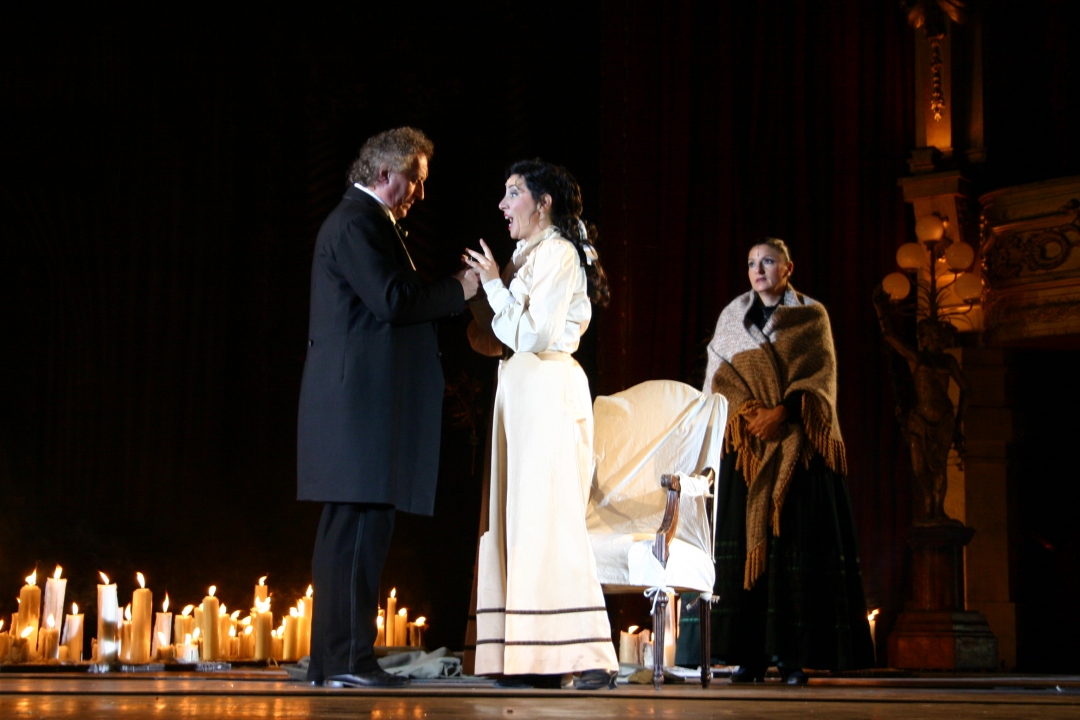 La Traviata, an opera in three acts, was premiered last Friday, 10/27/2017 at the Margot and Bill Winspear Opera House in the AT&T Performing Arts Center, located in 2403 Flora Street, Dallas, Texas, 75201; returning to the Dallas Opera for a ninth time. The music was composed by Giuseppe Verdi and it’s based on a libretto by Francesco Maria Piave. The plot follows two sources: a play entitled La Dame aux Camélias from 1852 and Alexandre Dumas Jr.’s most famous novel with the same name: Lady of the Camellias. The performance was sung in Italian with English subtitles.

Violetta Valéry, a courtesan, is really Marguerite Gautier in the novel; whereas Alfredo Germont, a young bourgeois, is Armand Duval. The female lead, a soprano, is sung by Georgia Jarman. The male lead, a tenor, is sung by René Barbera, who came in as a substitute for Zach Borichevsky. The opera was conducted by Carlo Montanaro.

The play contrasts a pleasurable, epicurean, libertine life versus a meaningful one tied to love, proving how love can be painful and not always pleasant. The opera, however, places love above everything else.

Even though God might forgive you for your sins, society will not. Simply renouncing to your past to build a better future is not always an option. Nineteenth century Italy, like England, embodied Victorian values. Censorship forced Verdi to adapt his plot to several generations in the past, separating it from Italian contemporary customs.

La Traviata, which means the “fallen” or “strayed” one, is a tale of love, an impossible love between a true romantic man and a more modern version of a reformed Thaïs. Violetta’s disease symbolizes, in a karmic sense, her atonement for her sins during his past, frivolous life. It is possible that Verdi composed this opera trying to redeem his lover, the operatic soprano Giuseppina Strepponi, a woman who had left her bastard children, whom she have had with different fathers.

Most people can recognize the Brindisi song, carried on early during the first act, which represents a true accomplishment in Verdi’s repertoire and a classic tune that still survives at opera’s pinnacle. A link to the song appears here: https://www.YouTube.com/watch?v=UZvgmpiQCcI. The performance also has many praiseworthy arias and duets, none of them more heartfelt and breathtaking than the one toward the third act’s conclusion, entitled Parigi, o cara (We will leave Paris).

Staging was an absolute success. One of its most obvious triumphs was including Valéry’s alter ego or shadow in several strong scenes. Such a character was a nice touch and served as a point of clarification for those opera-goers who have not yet read Alexandre Dumas Jr.’s book. This “shadow” looked exactly like Jarman and wore a white dress, appearing during important scenes, becoming less and less active as the opera progressed. Toward the second act’s resolution, she started walking very carefully, as if she was trying to keep her balance on top of a tight rope, representing Violetta’s struggle between life and death. In the third act, this character changes her dress from white to black, symbolizing that Valéry life has ended. During the third act, being Mardi Gras outside, the opera draws a very clear dichotomy between an inner, painful, true love and an external, lighthearted, fake fun.

Raúl Quintana Selleras (Cuba, 1984) has a BA in Religious Studies and a Certificate in the Study of Spirituality from Florida International University. Also, Raúl has a MS in Information Systems from the University of Texas in Arlington. Raúl currently resides in Dallas, Texas, USA. View all posts by rquintana84

I look forward to reading your comments. Let's talk about literature, movies, music, and religion. Let's defend truth, virtue, and freedom. Please be respectful and civil.